By Cornelius C. Ozeh
INTRO: The war of words between Chief Mbazulike Amechi, a First Republic Aviation Minister, and Dr. Jim Nwobodo, a Second Republic Governor of the Old Anambra State, reached a crescendo with Dr. Nwobodo telling Chief Amechi to keep quiet and respect his age. It all started when Chief Amechi criticized the Governors of the South East States as weak. Dr. Nwobodo, maybe because he was involved replied Chief Amechi in defence of the Governors saying that they were “agile”. In his reaction to Dr Nwobodo, Chief Amechi described Dr Nwobodo as inconsistent a politician and the origin of the problem between the North and the East in Nigeria, and Nwobodo told him to keep quiet and respect his age.
Post a Comment
Read the Details»

By Cornelius C. Ozeh
INTRO: The reading public in Nigeria were stunned with the war of words between the two respected golden Nigeria politicians, Chief Mbazulike Amechi (a First Republic Aviation Minister), and Dr Jim Nwobodo (a Second Republic Governor of the Old Anambra State). The clash started when the time-honoured statesman, Mbazulike Amechi blasted the South East Governors as weak, and Dr Nwobodo replied in their defence. Angered by the reply, Chief Amechi dismissed Nwobodo as not to be taken seriously politically.
Post a Comment
Read the Details»

By Cornelius C. Ozeh
INTRO: There are reports that the Electricity Distribution Companies (DISCOs) in Nigeria have written the Bureau of Public Enterprises (BPE)to return the power distribution assets acquired by them through the privatization of the power sector in 2013. Although, the Director-General of the Bureau of Public Enterprises, Mr Alex Okoh dispelled the report saying that the Bureau has not received any communication from the DISCOs that they want to relinquish the distribution companies.
Post a Comment
Read the Details»

The Reason Why Police Deployed Intelligence Gathering Mechanism in FCT

The Reason Why P&ID is in Arbitration Courts with Nigeria

By Cornelius C. Ozeh
INTRO: It is no longer news, the legal battle between the Process and Industrial Development (P&ID) Limited, and Nigeria. The case is rooted in the 2010 20-year long agreement between the Federal Government of Nigeria and the P&ID in which the latter (a UK firm) agreed to process natural gas in Cross River State for Nigeria’s electric power supply free of charge while the company would be allowed to sell the by-products (propane, butane, ethane) from the gas processing for profits. Nigeria on their side agreed to provide the necessary pipelining and supply of the natural gas to the processing company. The two parties are now in courts in the UK and USA.
Post a Comment
Read the Details»

By Cornelius C. Ozeh
INTRO: The Governor of Edo State and the PDP Governorship candidate in the September 19, 2020 Edo Governorship election disclosed his plan to build what he called technology park for repentant internet fraudsters otherwise known as “Yahoo Boys”. He made the disclosure in his campaign rally in Wards 6,7 and 9 in Egor Local Government Area of the State. In that rally, he argued that he has done greater works in 4 years than what Oshiomhole did in 8 years. For the people of Egor Local Government Area, he said he reconstructed the Benin Technical College (BTC) now Government Science and Technical College (GSTC).
Post a Comment
Read the Details»

By Cornelius C. Ozeh
INTRO: An orphanage ran by Mrs Elizabeth Oroyemi which was located at the Opa Area of Ile-Ife was sealed off, Friday by the Osun State officials led by the Commissioner for Women, Children and Social Affairs, Mrs. Bukola Olaboopo. The proprietor of the orphanage was reported to have slumped, and was resuscitated as a result of the operation; and a total of 42 inmates were rescued and sent to another orphanage.
Post a Comment
Read the Details»

The Reason Why Ghana Has Pledged to Review the GIPC Act

By Cornelius C. Ozeh
INTRO: President Nana Akufo-Addo of Ghana pledged to review the obnoxious Ghana Investment Promotion Centre (GIPC) Act of 2013 which demanded a one million dollar capital base from foreign investors. He gave the acceptance in a meeting with the Nigerian House of Reps delegation on Legislative Diplomacy Bilateral led by the Speaker, Rep. Femi Gbajabiamila in Jubilee House, Ghana on Friday, September 4, 2020. The delegation of legislators from Nigeria had waded into the trade controversies between Nigeria and Ghana over the GIPC Act which affects Nigerians doing business in Ghana.
Post a Comment
Read the Details»

By Cornelius C. Ozeh
INTRO: Following the re-inauguration of the Monitoring, Enforcement and Compliance Team of the Ministry of Agriculture in Lagos State, the Team charged with the responsibilities of dislodging illegal abattoirs, controlling and enforcing issues relating to the transportation and sale of meat swooped on the slaughter slab in Oke Rube area in Alimosho Local Government Area of Lagos State. A total of ten butchers and two live cows were arrested and confiscated respectively. The arrested persons would be tried in the Lagos State Task Force Mobile Court while the live cows would be deposited at the Oko-Oba abattoir at Agege for their owners to claim them within 48hours. The meat that the team confiscated has already been given to charity to the Juvenile Remand Home at Oregun, Ikeja. The acting Commissioner for Agriculture in Lagos State, Ms Abisola Olusanya explained the reason for the raid on the abattoir saying that it was because of the particular interest of the State Government about
Post a Comment
Read the Details»

By Cornelius C. Ozeh
INTRO: The Minister of State for Petroleum Resources, Chief Timipre Sylva discussed the increment of the price of petrol from N148 to N151 yesterday while addressing newsmen in Abuja.
Post a Comment
Read the Details»

The Reason Why According to Governor El-Rufai, Kaduna Spent Billions of Naira on Security

By Cornelius C. Ozeh
INTRO: In an occasion that brought leaders of faith in Kaduna together towards achieving peace in the State, and which was organised by the Kaduna State Peace Commission on Thursday, September 3, 2020, Gov. Nasir El-Rufai disclosed before the leaders of faith that the State has spent billions of Naira on security. A sum of money he regretted, would have been used in reducing the human and infrastructural deficits in the State.
Post a Comment
Read the Details»

By Cornelius C. Ozeh
INTRO: A group of 40 branch chairmen of Nigerian Bar Association (NBA) from Northern Nigeria after a meeting with the newly elected Olumide Akpata national leadership of the NBA on Wednesday, threw their weight behind the national leadership. By so doing, they dissociated themselves from the splinter of the NBA from the Northern extraction which formed the new NBA in protest of some grievances including the dis-invitation of the Governor of Kaduna State, Mallam Nasir el-Rufai as a speaker in the just concluded NBA conference.
Post a Comment
Read the Details»

By Cornelius C. Ozeh
INTRO: Led by the Minority Leader of the House of Representatives, Rep. Ndudi Elumelu, the Minority Caucus in the House of Reps on Wednesday ordered the Petroleum Product Marketing Company (PPMC) to arrest the increase of the Premium Motor Spirit (PMS) from N148 to N151. The group of Reps challenged the APC-led government to devise strategies for reducing the price instead.
Post a Comment
Read the Details»

By Cornelius C. Ozeh
INTRO : The Oba of Benin, Omo N’Oba N’Edo Uku Akpolokpolo, Oba Ewuare II charged the politicians seeking for the post of governorship position in Edo State this September 19, 2020 election in the State to emulate the former President Goodluck Jonathan. He regretted that Edo State has been in the news for the wrong reasons due to the politicking by the two gladiators: Adams Oshiomhole and Gov. Godwin Obaseki.
Post a Comment
Read the Details»

By Cornelius C. Ozeh
INTRO: The screening test for the 72nd Regular Course of Nigerian Defence Academy (NDA) earlier scheduled to hold on 30th May, 2020 has been postponed indefinitely. The Registrar of the Academy, Brigadier General A A Aboaba while advising applicants to keep tabs on the development of a new date gave the reasons for the postponement as follows: #1.       Covid-19 Pandemic: The NDA screening test was reported to be postponed due to the Coronavirus pandemic that is ravaging the world. The disease thrives by human to human contacts which the screening test is bound to engender through pooling together of the participants in the test. Hence, in the interest of safety, the screening test was postponed indefinitely. #2.       In Obedience to the Ban on Inter-State Movements by the Federal Government: This is another reason given by the Brigadier General for the postponement of NDA screening test. Applicants to the screening test are spread across the states of the federation, and th
Post a Comment
Read the Details»

By Cornelius C. Ozeh
INTRO: In a resolution following the adoption of the motion on Power Sector Recovery Plan and Impact of COVID-19 Pandemic which was sponsored by Senator Gabriel Suswam of Benue North, the President of the Senate, Ahmed Lawan called on the Federal Government to cancel the Privatization of the Power Sector due to following reasons: #1.       Persistent Power Failure: The privatization of the power sector was geared to addressing the problem of epileptic power supply in Nigeria. The current structure were put in place under Goodluck Jonathan’s administration, but it has shown no significant improvement in the power supply in Nigeria. Electricity still remained a luxury to a vast majority of Nigerians. This was made more obvious during the Coronavirus pandemic stay at home in Nigeria. #2.       Lack of Prospects for Improvement: One could argue that the privatization of the power sector done by Goodluck Jonathan administration is still very unripe for assessment since it came int
Post a Comment
Read the Details»

By Cornelius C. Ozeh
Introduction Groups have attracted the inquisitive interests of assorted disciplines including Political Science, Psychology, Sociology, Anthropology, Epidemiology, Education, Social work, Business, and Communication Studies. A great deal of these disciplines hold groups as the smallest unit of the society in such a manner that understanding the groups amounts to understanding the society. The most revered group theorist in Political Science, Arthur Bentley in his magnum opus, the Process of Government, along the thought that a group is the smallest unit of the society, forcefully reduced political phenomena to group dynamics, saying that "When groups are adequately stated, everything is stated. When I say everything I mean everything…,” (Bentley, 1908, p. 271). This statement goes a long way to show that the shortcut to studying political processes of a political system is squarely by studying the interactions between and among the groups. This chapter discusses group dyna
Post a Comment
Read the Details»

WOMEN AND THE QUEST FOR NATIONAL DEVELOPMENT IN NIGERIA 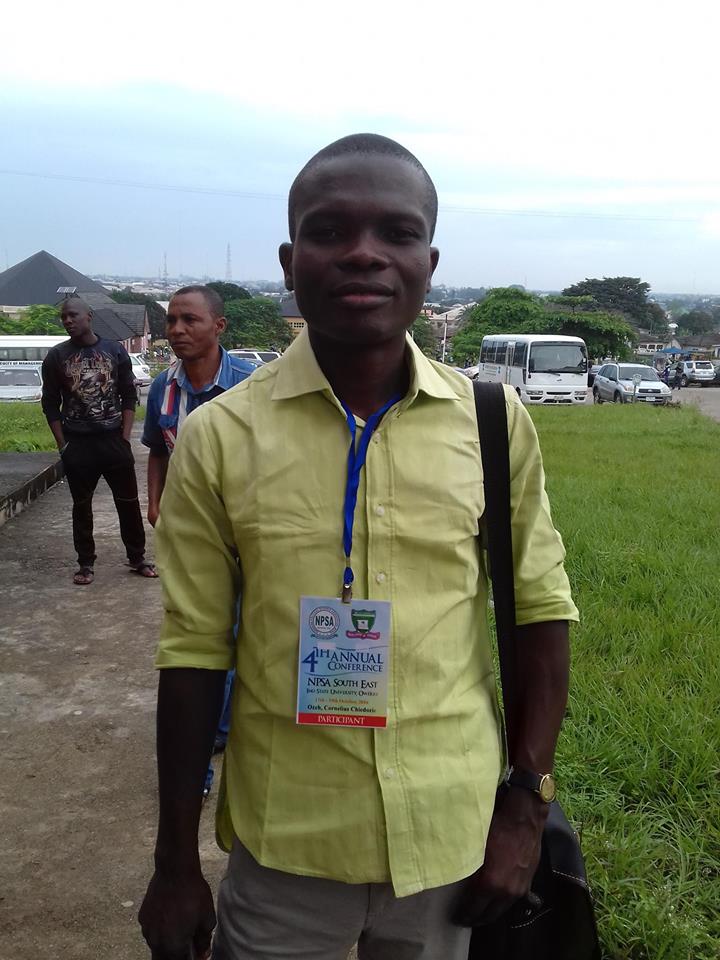